Something I was anticipating most about getting married was cooking our meals. Once all of the little kitchen parts were finally put together and I had a semi-functional workspace, I sat down on our couch, ready to turn a sticky note into a grocery list, and thought, “Alright, what’s for dinner?”

Somehow it had never occurred to me how much work went into making the home’s menu.  Mom always just knew what we were eating, so I would just know, too (as if by setting up my own rotating utensil-caddy some compartment of my brain would unlock and out would flow all the secrets of homemaking). I panicked.

Just find a recipe, buy ingredients, and cook. Why was this so hard?

I sat in the same spot on the couch with my iPad for no less than 4 and a half hours that afternoon, scouring the Internet, trying to figure out the first real dinner we would share in our new apartment (the PB&J’s and Fruit Loops we’d been sustaining on through the big move-in didn’t seem to count).

I just wanted so badly to be good –to not identify with any of the “new-wife’s cooking” jokes or horrors told and retold and exemplified through sitcoms (even though I had been equipped for years with cooking basics, tricks, and recipes from my mother).

But I learned something:  I do not have time to spend nearly 5 hours planning one meal.  So I hung up a chalkboard and developed a system that works for our home: 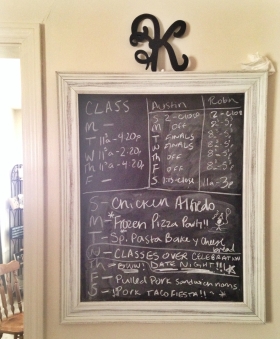 Just trust what skills you have, and realize you will be eating dinner every day. Everyday. Which means every day, you get another chance to redeem yourself if something burns, goes flat, or tastes funny. But I’ve found that meal planning is an easy way to curb new-wife cooking anxiety and save some serious time and money.

I’m Robin! I believe in bubble baths. I believe in really good hugs. I believe the right shade of lipstick is the one that makes you feel like a million bucks. I believe in the magic of chocolate chip cookies, laughing until you cry, and really pretty shoes.

I believe every day may not seem special, but every day is sprinkled with little things worth smiling about. Welcome to the space where I hope to inspire you to seek out the daily sprinkles in your life by sharing with you the little sprinkles from mine.